Portable piano, in other words the beauty of an object

While surfing the Internet I came across an interesting statement. According to the information I found over the last few years the interest in design in Poland has increased. If the tendency is to be understood as increasing popularity of the term itself, then it is hard to disagree with such a statement. I am not an advocate of frequent use of the term “design” in relation to applied art. Despite its ubiquity, this notion still sounds peculiar to me. It brings to mind a sterile laboratory, something opposite to cosines; it is therefore inadequate especially if one describes some interior designs. It certainly corresponds to objects expressing momentum towards modernity. As regards the last phenomenon I often have some reservations. Recently, however, I have come to realize that modern design, even the sumptuous, extremely simplistic, futuristic forms will turn out to be old fashioned and conservative at some point in time. In the future it will become a testament concerning the times in which we live now. Perhaps it will become an element of a museum exhibition.

Adopting a similar perspective towards the exhibits dedicated to the Biedermeier era presented at the National Museum in Warsaw allows us to realize that we are witnessing a testimony of modern manner as regards looking at objects, especially at furniture and small appliances which were to be used at home. Biedermeier era, also referred to as “domesticated romanticism”, developed in Germany, Austria (also Galicia) starting in 1815. At the end of this epoch in the history of art the Spring of Nations started. This style was reflected in various branches of culture – in painting and literature as well. Apparently it manifested itself in craft, mainly in the field of furniture design. Above all it focused on providing comfort to the bourgeois family. Creating a sense of intimacy was to be obtained by accumulating various trinkets, charming decorations. Those elements combined aesthetic features with functionality.

Viennese portable piano is one of the exhibits presented at the aforementioned exhibition. While admiring this instrument, I came to the conclusion that it is actually a quintessence of Biedermeier era. It is made of noble types of wood, veneered with birch brush. It is both solid and extremely aesthetic. The woman who used it was not only able to entertain herself and the audience. She also had a chance to take care of her beauty using the mirror case placed in its cover. The rose motif characteristic for this era creates a frame around the mirror but it also swings from each side of the vase, evoking the image of a cozy, comfortable interior of the bourgeois salon. The miniature landscape above the keyboard of the piano is probably referring to the theme of the journey. Attentiveness to details with which the instrument was manufactured fits into the prevailing attitude towards objects perfectly; both during their manufacture and usage. 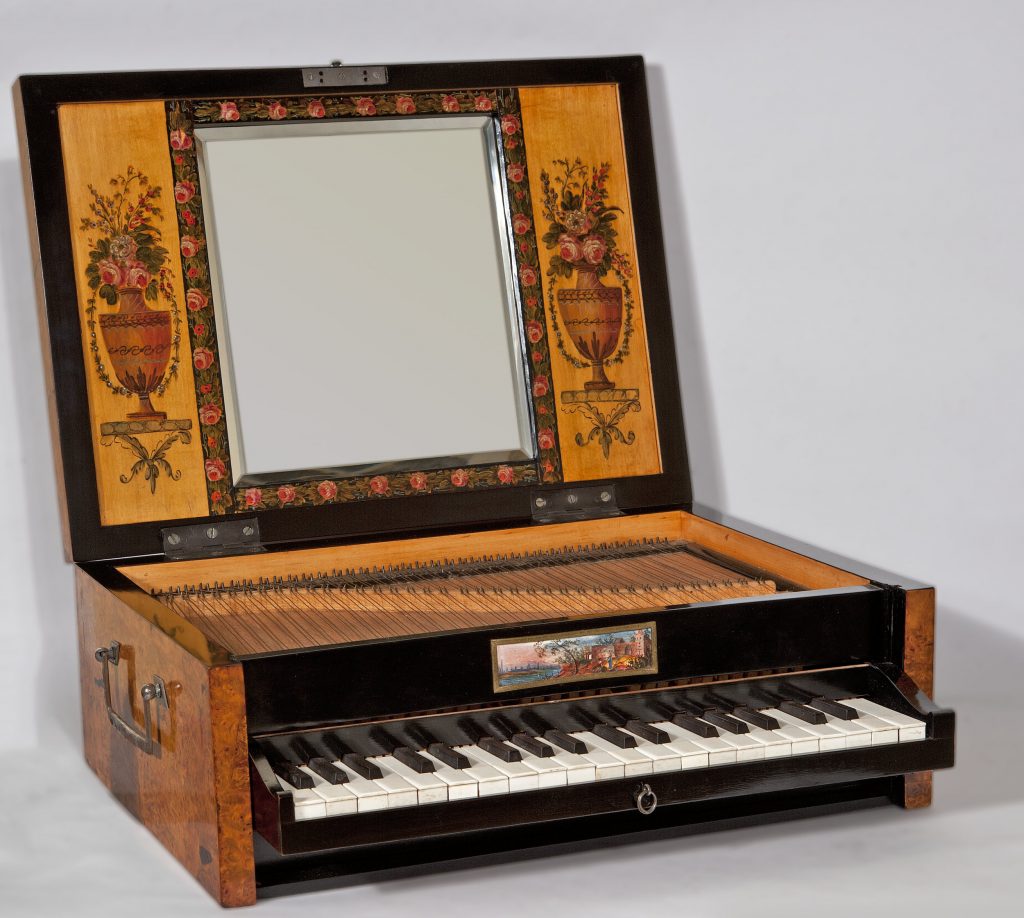 Although some stages of the processing as regards raw materials could have been carried out by mechanical means (after all, it was produced during the era of industrial revolution), which affected the price of goods, lower than the price of traditional craftsmanship, it did not resulted in mass production and, consequently, pinchbeck. On the contrary, craftsmen, in order to meet the needs of their customers, created durable and often breathtaking objects. Their users, depending on the character and function of the objects presented sometimes a pious attitude (one can imagine how porcelain cups with images of national heroes were treated).

While I was admiring the exhibition, I was pleased to note that – according to the intention of the authors of the project – the first thing coming into my mind is the skillfully presented beauty of the exhibited objects. Their usefulness, durability and aesthetic features make museum exhibits serve, at least in these respects, as an inspiration – both for contemporary artists and users.